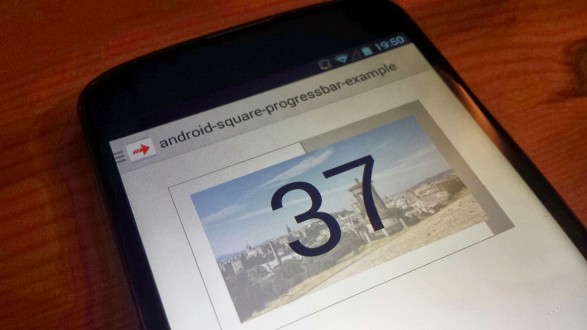 After my second holidays this year I’m finally publishing the next major version of the android-square-progressbar. This includes some new stylish effects to the library and fixes a few bugs which appeared. Thanks again for the feedback guys.

I added 2 more or less small tweaks for the image border, but they give an additional nice look. You can simply add them to your android-square-progressbar with the following commands:

This is one of the features I was looking forward to implement. So I decided to put a bit of more effort into it, and I came up with the following usage:

There is a new object called PercentStyle which has 3 attributes:

You can easily assign different styles to the square-progressbar. This is how you can do it:

In the example application I implemented a new dialog where you can play around with different combinations:

A bug appeared while using the library and the opacity option (added with the version 1.2.0). If you didn’t set the opacity to false, there would be a NullPointerException. This is now fixed with this version.

You can find the newest code on GitHub here: https://github.com/mrwonderman/android-square-progressbar

There should be an updated example application on Google Play in the next few minutes: https://play.google.com/store/apps/details?id=net.yscs.android.square_progressbar_example

For questions and/or feedback, just drop me a line via email: yannick@signer.pro